I had the strangest experience last night.

There is an illusion we call continuation of consciousness, and I suddenly became aware of it in a very big, big way. I felt as though I was going to die, whether that be in a literal or figurative sense. I felt as though the person who woke up in my body would be someone else, an alien who would have forgotten things that I was thinking, would have different motivations, hopes and dreams. It was all very strange.

As I was lying in bed I had a number of bizarre visions as well; I had visions like an hourglass running out, looking as though it were limned by the infinity symbol. I watched it run out, tried to envision it turning over, only to watch it run out again. When I tried to visualize my council of spirit animals (more on that later), I came up empty. I instead envisioned a blank gray wall which receded from me until I realized I was looking at a large skull that became part of the form of a Grim Reaper-like figure. It was then with this figure positioned over me that I suddenly became aware of the presence of my spirit animals once again. My Left cried out against this figure and I felt strongly implored to take up my “sword” and defend myself against this manifestation of Death.

All in all, it was both a deeply humbling but empowering experience. I’m not entirely sure what to make of it, but as much as any man can say this, I know I’m here today.

Here in Gen 12 we have the departure from Abram from Haran, where his father Terah lay dead. God tells Abram to go, leave for a new land. Abram feels this conviction from God and takes his wife Sarai and his nephew Lot to the land of Canaan, which if you recall from Genesis 9 was basically cursed by Noah and by the Lord. Or at least its inhabitants were. So the godly man, Abram, is cast by God Himself into the realm of the ungodly, the Canaanites. And the Lord sayeth, “Trust Me on this one.”

One verse of note is Genesis 12:3, wherein God tells Abram, “In you all the families of the earth shall be blessed.” According to our old friend Matthew Henry, this is to signify the coming of Christ, that by the line of Abram shall the world be saved.

So when Abram finally settles near “Shechem, as far as the terebinth tree of Moreh” (Genesis 12:6). 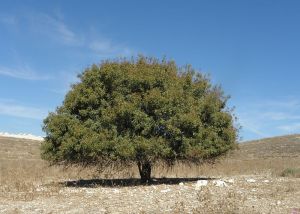 It seems there is a great deal of discourse surrounding this tree business. Matthew Henry does not touch on the nature of the tree or any symbology thereof. This website, the Jewish Heritage Online Magazine, mentions that tree worship existed in some form in ancient days. They suggest that by being “rooted in the earth and [reaching] toward the sky,” trees represent a bridge between Heaven and Earth, or symbolize man’s journey from the latter to the former. Apparently at some point this practice was discontinued, possibly to mitigate confusion and prevent blurring between the holy religion of Israel and the idolatrous religions of the Canaanites.² Interesting. Now back to Abram.

Abram carries his faith with him throughout his journey and sets up an altar wherever he makes his home.

“Wherever we go, let us not fail to take our religion along with us.”

God blesses Abram and tells him that his descendents will inherit this land, this land of Canaan that is currently in possession of the ungodly. As I said recently, perhaps as recently as yesterday, worldly goods cannot fill a spiritual void. In time, the cruel and evil will fall and the righteous will rise. I’m not necessarily using “righteous” to mean “Christian,” here, but I believe in the inherent goodness of humanity, or at least the potential and desire for good.

Man is often his own worst enemy, and our desire for righteousness must overcome our desire for comfort in sin. Man must become accustomed to some level of discomfort in order to break the cycle. In our modern society, we have food and shelter and entertainment but these things do not bring happiness. Our comforts are worldly and fragile; satisfaction of the soul, peace with the Divine, is forever.

“So often times it happens that we live our lives in chains
And we never even know we have the key.”

But I digress. Things become difficult for Abram once there is a famine in Canaan, as described in Gen 12:10, so he leaves and heads to Egypt. Even a godly man such as Abram is burdened with doubt and disbelief in this trying time, and he lies because he is afraid. Abram pretends that his wife Sarai is his sister because he fears for his life and safety, believing he will be killed by someone who wishes to claim her.

Once the Pharaoh’s men see her, they take her to the Pharaoh, but God has other plans. Even though Pharaoh treats Abram well, the Lord shakes things up, perhaps so that Abram will not be comfortable in this land but will return to his God-given destiny. God plagues the hell out of Egypt (a preview of things to come) and Pharaoh realizes the problem, gives Sarai back to Abram, and kicks him the hell out. Matthew Henry’s commentary fits well here:

“Those who set out for heaven must persevere to the end. What we undertake, in obedience to God’s command, and in humble attendance on his providence, will certainly succeed, and end with comfort at last. Canaan was not, as other lands, a mere outward possession, but a type of heaven, and in this respect the patriarchs so earnestly prized it.” ³

Just as is in The Four Agreements, Matthew Henry equates Canaan as a state of mind, a type of heaven. Though the story in the Bible is about a land, there is more than meets the eye. It is symbolic of the gifts that God grants to the faithful, it is symbolic of peace, serenity, and love. God did not let Abram settle in a land of fear, a land of suffering and deceit. Abram found no peace in the land of Egypt, and so too do we find no peace while we are burdened by our lies and our mistrust. Abram initially trusts God to provide, but when times get difficult, he abandons the dream and promise of Canaan for worldly “security” elsewhere.

It seems to me that this was a lesson that Abram needed to learn the hard way. God is not a wizard, but had He wanted to, I am sure He could have prevented the famine in Canaan. But God does not make our lives easy; instead God teaches us to have faith in the most difficult times. God does not clear the skies and calm the waters, but instead dances with us in the rain and teaches us to weather the storm. This is how we learn and grow stronger. Like a parent to a child, God allows us to suffer and be injured that we might grow wise and strong.

God does not always appear to us and tell us where to go and what to do, but if we pay attention to ourselves and to our feelings, we can know right from wrong and find a good path for ourselves. We will not be comforted in Egypt, and must find our way to Canaan. In Canaan we will find peace, and our faith will be rewarded. It may be a long road, full of setbacks and obstacles, but faith can move mountains, not by magic, but by inspiring us and motivating us to take up our pickaxes and start chipping away, one stone at time.

I feel as though I am repeating myself and rambling; I will end here for today. Love and be loved. Spread joy wherever you go.

Peace be upon you.